Here is the chance to find out about the E & S Computers Team, how they got started in I.T and what they like to do to relax! 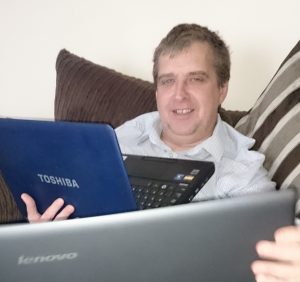 Eddie has spent 25+ years working in I.T.  After working for a Multi-National I.T Company as a Field Engineer, working on the Dell and Barclays Contracts to name a few, there isn’t much Eddie hasn’t seen.

Eddie’s “claim to fame” is that he crossed paths with Belinda Carlisle when she picked up his diary that he had dropped. He was loading a large laser printer into his van when he dropped it.  Eddie was of course speechless!

Eddie’s love of all things technical started at an early age. He dismantled his Dad’s cassette player, and put it back together, with a few spare parts too!  His first computer was a 48K Spectrum, which he changed the membrane for the keyboard on!!

When Eddie isn’t working he can be found modding his Commodore Amiga 1200.  He enjoys playing retro games such as Ashes of Empire and Police Quest. 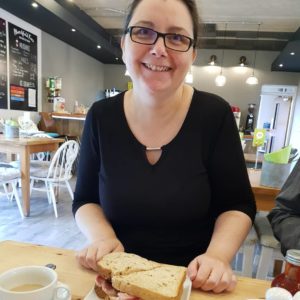 Joanne has worked at E & S Computers since it was established in 2007.  Her job background varies from Business Admin, Hairdresser, Residential Care Assistant, and a Lunchtime Supervisor at a Primary School.  Joanne completed a Level 3 Diploma in Management in 2018, which she thoroughly enjoyed.

Her interest in I.T started with the purchase of her first computer in 1993, a Commodore Amiga 1200, with hours spent playing games like Monkey Island & Maniac Mansion, and using the Word-processing package, to write stories.

Joanne also enjoys other pursuits outside of work that are less technical, such as experimenting in the kitchen (much to Eddie’s delight – unless something goes drastically wrong!).  She likes to bake cakes, and on occasion brings them into work as a treat!  She has also discovered a love for crochet, which she puts down to her age!  Her latest interest is researching her family history, which has uncovered a rather global ancestry that she wasn’t expecting!  She has also discovered a knack for gardening, and when the weather allows she can be found pottering around the garden!

Back to top
Manage Cookie Consent
To provide the best experiences, we use technologies like cookies to store and/or access device information. Consenting to these technologies will allow us to process data such as browsing behaviour or unique IDs on this site. Not consenting or withdrawing consent, may adversely affect certain features and functions.
Manage options Manage services Manage vendors Read more about these purposes
View preferences
{title} {title} {title}